One commonly used technical trading tool is the Fibonacci ruler.  Using this tool we can make “educated predictions” as to where we think that the market might reach if it goes into a correction.  Fibonacci theory suggests that the market will move according to the “golden ratio”.  In other words, every market move will eventually lead to a correction in which the market could find support/resistance at the 38.2%, 50% and 61.8% retracement of the last move.  That is of course assuming that the bull run persists.

Just like any other technical indicator, interpretation and measurements are somewhat ambiguous.  There are as many theories on where to begin measuring with the Fibonacci ruler as there are indicators themselves.  We believe that measurement should begin at the recent high or low subsequent to any measurable retracement.  Thus, when calculating the possible retracement levels in a down trending market, you wouldn’t necessarily begin measuring at the absolute high.  If the market peaked, and retraced at least 31.8% of that drop before continuing descent you should place the top of the ruler at the peak of that retracement.

After assessing the monthly chart, using a Fibonacci ruler, it is discovered that 1247.94 was the 61.8% Fib retracement from the high set in the fall of 2000.  We also noticed that the market had penetrated this level, reaching a high of 1249.60 in August, but failed to hold.  This suggested that the market was “tired” and ready for a short-term trend change.  Based on bearish observation of indicators, one may have opted to construct a strangle in which the call strike was much closer to the money than the put strike.  However, it isn't logical to sell a call at resistance.  It is typically a much  better strategy to collect a little less premium in exchange for a further out of the money strike price. While some might consider selling an asymmetrical strangle to be aggressive, and maybe even foolish, we believe that being aware of the market’s tendencies and using that knowledge to adjust the strategy is imperative for option sellers to succeed. 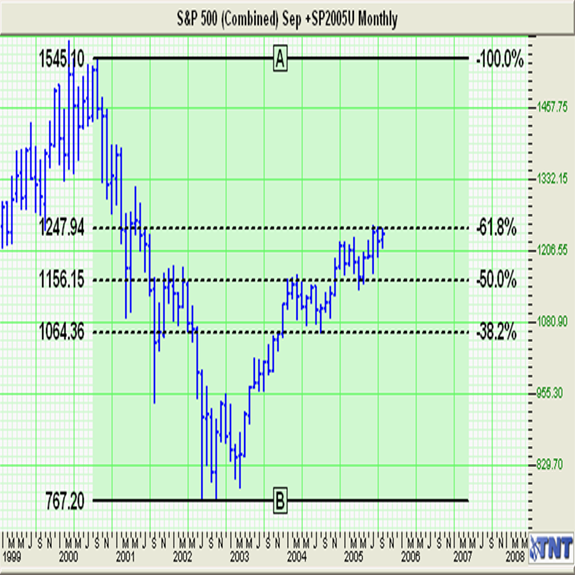 Excessive analysis of the September S&P futures during this type leads me to believe that the most productive means of maximizing premium while mitigating risk would have been  through the sale of the 1185 puts and the 1260 calls. In this case, it may have  been possible to collect $11.30 in premium ($5 for the call and $6.30 for the put), this equates to $2825.   Hence, if everything goes perfectly and both options expire worthless the trade would be profitable by $2825 before considering commissions and fees.  Conversely, we typically recommend that traders offset short option positions before expiration which lowers the profit potential but more importantly mitigates exposure to loss once a majority of the premium has eroded. 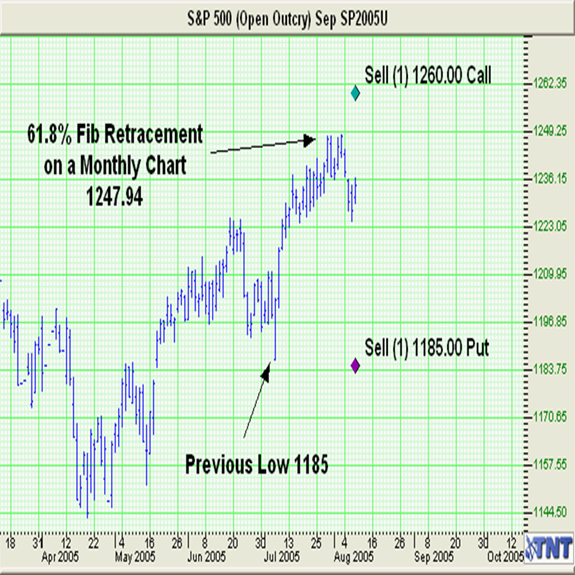 As expected, the market failed at Fibonacci resistance and drifted lower throughout much of August. As I mentioned, one of the keys to selling options is the ability to limit losses and risk whenever possible.  For this reason, you should make it policy to buy back short options once 80 to 90% of the value has eroded. Keep in mind that this is a rule of thumb, and there are a lot of variations.

Looking forward, the September S&P found support on trend line support as the construction of the trade predicted.  On September 8th, the S&P was trading around 1235, and our short 1185 put had a value of $1, or $250.  With a little over a week to go to expiration,  it would be advisable to offset the final leg of the spread to lock in profits and take the  risk off of the table.