It seems like an eternity has passed since the last agricultural bull market. From early 2010 through spring of 2012, corn prices more than doubled in value; in the same time frame soybeans and wheat made similarly miraculous moves; yet, since then the agricultural commodities have been sucked into the never-ending downward commodity spiral. However, the beauty of the agricultural markets is they are a renewable commodity in which supply and demand fundamentals can alter dramatically between crop cycles; and if Mother Nature has anything to say about it, they can change from season to season, or even weather pattern, to weather pattern.

Although I rarely focus my commodity market analysis on fundamentals, I certainly keep an eye on them. Following a bearish USDA Prospective Plantings Report on March 31st suggesting more than expected farming acres were being allocated to corn, the price of corn has nearly retraced all of its losses as the market speculation of a hotter than normal summer, and dryness in Brazil, have lured bottom fishers into the market. In my view, this could be the beginning of something big for the ag bulls.

The premise of a new corn bull market is made more likely by the fact that large speculators are holding massive net short positions. Specifically, according to the Commodity Futures Trading Commission (CFTC), as a group, the large speculator is holding the largest bearish corn position seen in over a decade. In our estimation, this suggests most of the bears have already sold, and if given reason will be looking to exit (buy back their holdings). Consequently, even in the absence of fresh buyers, short covering alone could push corn well above $4.00! 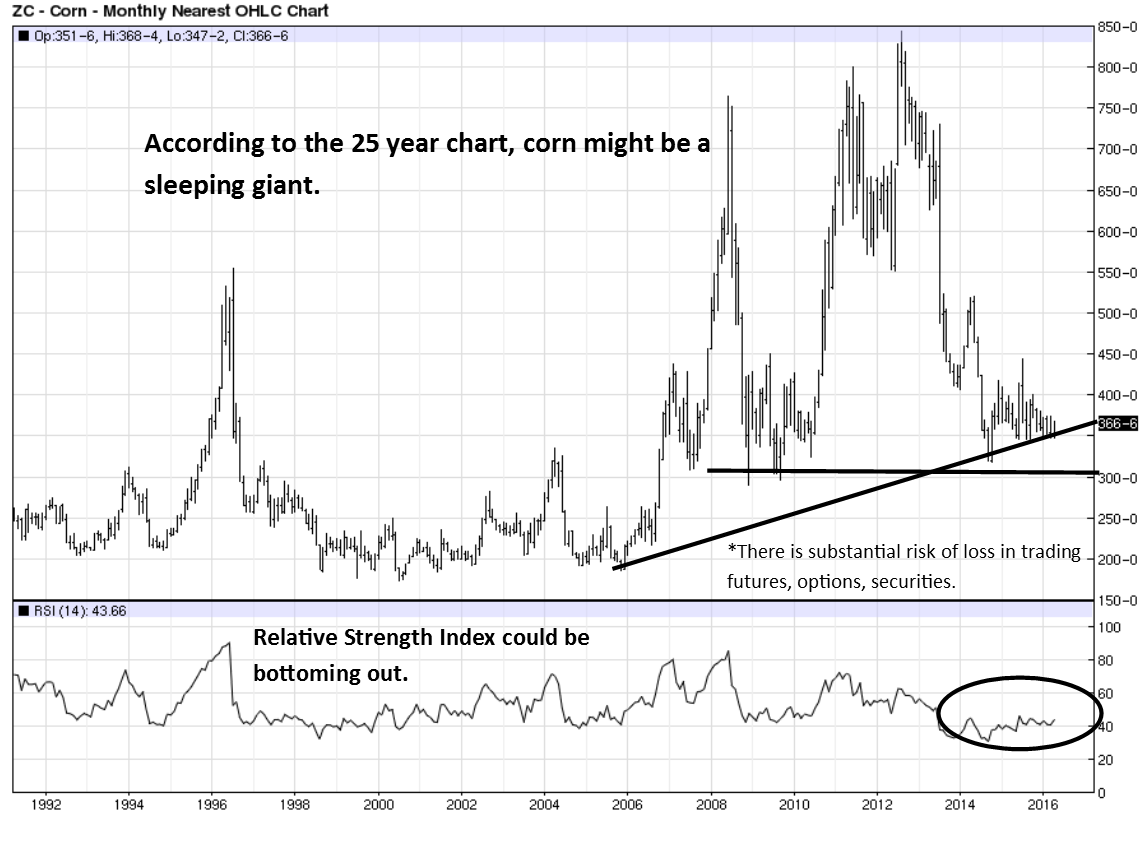 It is no secret that the agricultural commodities are in the dumps, but a quick look at the 25 year chart suggests that might be exactly when they are the best “value”. Corn, along with the other grains, namely wheat and soybeans, tend to go up faster than they go down. This is in stark contrast to financial assets such as the stock indices, which see prices take the stairs up but the elevator down. Accordingly, the grain complex is capable of stunning rallies, often coming “out of nowhere”. With corn trading at levels not seen since 2010, and a Relative Strength Reading in the trough, the backdrop is set for an interesting growing season. We don’t know exactly when the fireworks will be lit, but we do know it might be a good idea to have a big toe in the water.