Is the oil run done yet?

Despite a rather miraculous recovery in crude oil bringing prices from a paltry $26.00 per barrel into a more respectable mid-$40 range by early March, pessimism in the energy sector is fierce. For many, it’s hard to believe a commodity can nearly double in value in the face of what the majority tout as overly bearish fundamentals. Yet, as we habitually learn in commodities; fundamentals are priced into the markets well in advance, as opposed to real-time. Additionally, commodity prices, as well as most other assets, are prone to extending beyond realistic fundamental pricing before reverting to a more “fair” price. In our opinion, that is exactly what the $20 rally from the January low was.

In light of the massive drop in U.S, and even international, rig counts we have to believe that somewhere between $40 and $50 is a relatively equitable price for oil. After all just in the last 12 months, we’ve witnessed domestic oil rigs drop 578 to 450. Similarly, international rig counts have declined in the same period 266 to 985.

Regardless of rigs dropping offline, the oil market remains well supplied; thus, the widespread bearish sentiment. Nevertheless, we mustn’t forget how frail the energy supply chain can be. For instance, a “small” leak in the Keystone Pipeline this week forced oil prices $3 to $4 per barrel higher. The fundamental backdrop in oil can, and does, change on a dime; when it does we’ll likely see a rally swinging the pendulum higher than it reasonably should go (the inverse of what was seen in January). However, such a development could be several months away.

In the meantime, however, prices seem poised to make a move into the mid-to-high $40s. Seasonality calls for continued firmness into late April, and an unofficial OPEC meeting to discuss production cuts will take place in Doha, Qatar on April 17th. Coincidently, seasonal service MRCI claims historical statistics suggest getting bullish crude oil on, or about, April 18th, has been profitable 80% of the time over the previous 15 years.

The so-called “smart money” in the commodity markets have been establishing a rather large long position in crude oil according to the latest COT (Commitments of Traders) report issued by the CFTC (Commodity Futures Trading Commission). In fact, these large speculators have increased their holdings from about 200,000 net long futures contracts to roughly 300,000 futures contracts. Yet, the market shouldn’t be top heavy until this group gets well into the 400,000 ballpark. Accordingly, the path of least resistance should be higher in the short-run. 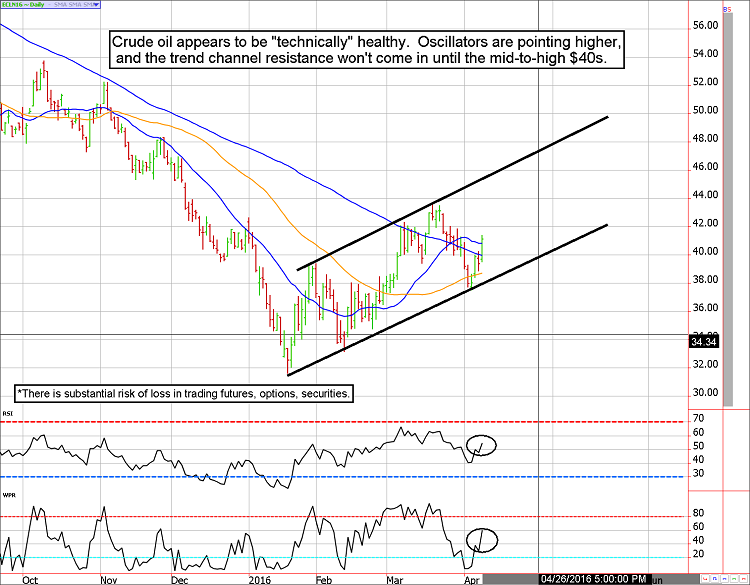 From a technical standpoint, oil futures appear to be inclined to move higher. Oscillators such as the Williams %R and the Relative Strength Index, are proposing momentum is higher. Further, the oil market has carved out a trading range implying the next major resistance won’t be seen until prices reach the mid-to-high $40s. Simply put, don’t underestimate the oil bull just yet!