Natural Gas Prices could (finally) be set for a Recovery

Can we get a bounce in Natural Gas Futures?

As is often the case in the commodity markets, one man’s (or woman’s) pain is another man’s (or woman’s) opportunity. In my opinion, the recent collapse in natural gas prices is a prime example. The “El Nino” effect, which brought warmer than usual weather to the nation, and chronically glutinous supplies have forced some panic selling the spot market and front month natural gas futures.

Specifically, as the November natural gas futures contract went into expiration there was a clear amount of desperation as commercial hedgers were forced to liquidate at poor prices. Further, small speculators who were long the contract were scrambling to get out, or were seeing their positions force liquidated by margin clerks across the industry. I’ve seen this pattern repetitively in the commodity markets; it can be difficult to determine where the exact inflection point is but it almost always resolves itself into a sharp rally off of a price that is later recognized as a significant low. 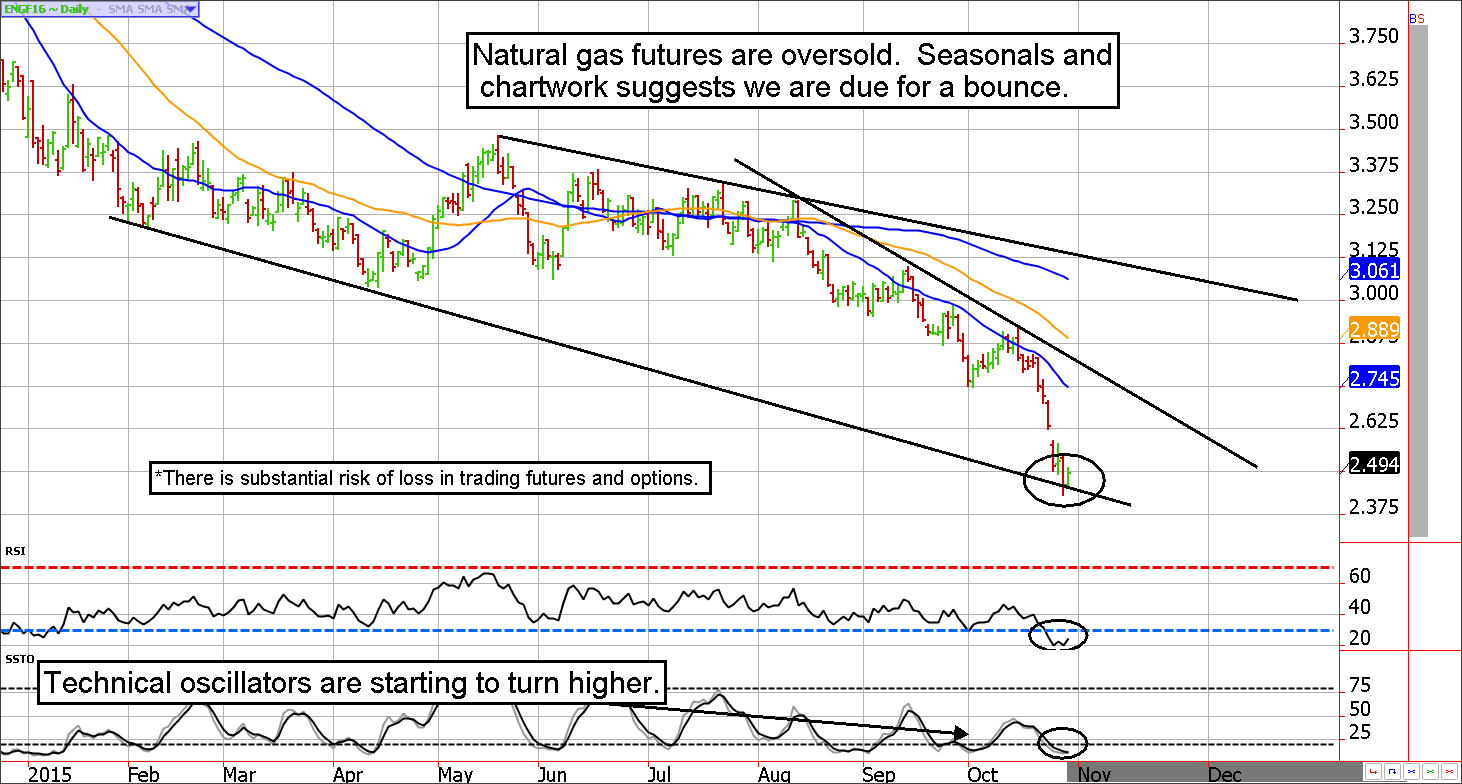 There are too many shorts in natural gas

At the moment, the group identified by the CFTC (Commodity Futures Trading Commission) as a “large speculator” is holding one of the biggest net short positions in history. In natural gas, as well as other commodity markets, when we begin to see record setting directional speculations, the trend is often coming to an end.

Soon, all of the traders currently short the market will want to lock in profits. As some of them begin ringing the cash register, the market has the propensity to move sharply higher to hit buy stop orders lining the upside. In such market conditions, fundamentals are irrelevant; this is a fact that some traders have a hard time accepting.

Fundamentals are only bearish until they aren’t

We all know there is a bearish fundamental backdrop in the natural gas market. Fracking has led to a supply glut so extreme that many producers are opting to “flare” some of their inventory to avoid the cost of bringing it to market. This is akin to a clothing manufacturer designing and producing a line of apparel, only to burn it in a bonfire to “save” the money it would have required to bring it to market. In other words, the natural gas industry believes they will lose less money by destroying the product than they would selling it. Nevertheless, fracking has been the story for years but it hasn’t necessarily eliminated some rather large winter rallies. In 2013, in a post-fracking world, natural gas entered the fall season near $3.50 and ended its run in the subsequent February near $6.50! Additionally, the last occasion in which natural gas prices flirted with $2.00 was temporary; prices quickly soared into the $3.00 area.

Seasonal Tendencies call for a rally from November through February

Nearly every year, despite a supply glut, natural gas prices find support during the winter months. This is because it is difficult for energy vendors to accurately predict Mother Nature, and therefore, the demand for natural gas for heating purposes. Accordingly, even if we don’t see a sharp rally in natural gas as we suspect is the most likely scenario, we should at least see a limited downside. Utility companies will be inclined to build their stock piles ahead of the cold season while prices are cheap.

Keep in mind, the last time we saw $2.00 natural gas was in 2012; at the time the market bottomed at $1.92 based on the front month contract. On this go around, the low has been about $1.95. Could this be a double bottom? We think the odds suggest it will be.