Small speculators might be too long the e-mini S&P

This newsletter was emailed to DeCarley Trading commodity brokerage clients on September 24, 2015.

The Commitments of Traders Report on S&P Futures is Concerning

Each week we scour the Commitments of Traders Report (COT) issued by the Commodity Futures Trading Commission for clues on the holdings of futures market participants. With this information, we can sometimes infer the future actions of those market participants in an attempt to predict price changes. When it comes to the S&P 500 futures (e-mini S&P), there are some eyebrow raising aspects to be aware of. We are not “doom and gloomers”; instead we are eternal optimists…but the reality is the equity markets have a higher probability of continued weakness in the coming weeks relative to forging a rally. According to our analysis, the mid-to-low 1800s in the S&P are real possibility.

A Refresher on the CFTC's COT Report

For those of you unfamiliar with the COT Report, it details the net long or short positions in each commodity futures market for three major types of traders; large speculators, small speculators, and commercial hedgers. There are some more complex features and versions of the report, but this is its essence in a nutshell.

Being privy to how certain types of traders are positioned, and how these groups generally behave, is a potential advantage to commodity traders. With this information, we can see if the market in general, or any of these three groups of traders, has become overzealous in their holdings through identification of historically large net long or short positions. We can also see when a trend could be budding by identifying the beginning of a new position being established by speculators.

For this information to make any sense, we must first know the inclinations of these two groups of traders. Large speculators are those with deep pockets, and are considered to be the smart money. Obviously, they are not always right and when they are wrong they have the lasting power to stay in the position until they are eventually right. Small speculators are harshly referred to as the “dumb money”. They tend to be trading on shoe string budgets, and because of this they are very fickle. Once a trade goes against them, they are quick to offset their holdings. Further, they are often wrong in their speculation to begin with.

As wonderful as this report is, it has its flaws. The COT Report is released each Friday but the data contained in it was collected on the Tuesday before the report. Simply put, it is not in real time so analysis of it requires some speculation. Further, as the markets become bigger and the speculative community undergoes cycles of aggression, the inferences derived from the data must be adjusted to match the current market condition. Nevertheless, trading commodities without this information is the equivalent to driving a car blindfolded. Let’s take a look at the current setup in the ES (e-mini S&P futures).

The most recent COT Report was released on Friday September 19th, and accounts for data acquired on September 15th. At the time, small speculators were estimated to be holding a net long position in excess of 400,000. This is the first time we’ve seen this group get this aggressive on the long side of the market (ever). At the same time, the large speculator had amassed the largest net short position we’ve seen this group take since 2011; however, with a net short holding of roughly 250,000 contracts large speculators appear to still have capital available to add considerably to their position. 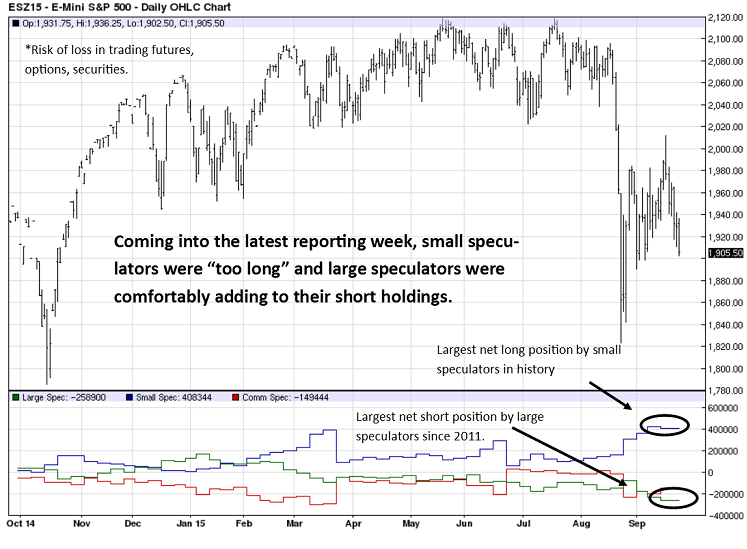 To illustrate, the fickle and, assumedly, less sophisticated group of traders came into the week holding a historically aggressive bullish position. Yet, the group with substantial trading capital and the means to potentially make more informed decisions came into the week mildly short the market with plenty of gun powder to spare. We believe that this environment sets up a relatively high probability of the simultaneous unwinding of the small speculators long position and the accumulation of the large speculators short position. Together, these actions could lead to a rather sizeable sell off.

With that said, the selling pressure we’ve seen this week has probably already accounted for at least half of what the COT Report was suggesting last Friday when it was released. Nevertheless, we doubt it is over. In our estimation, liquidation of the small traders alone should put prices in the 1850 area in the S&P 500. Should large speculators decide to load the boat, we could see 1830 to 1800. Should such prices be seen, the odds will shift in favor of the bulls!